This post focuses on Vim and is a part of a series of posts describing my development environment: zsh, Vim, tmux, etc. 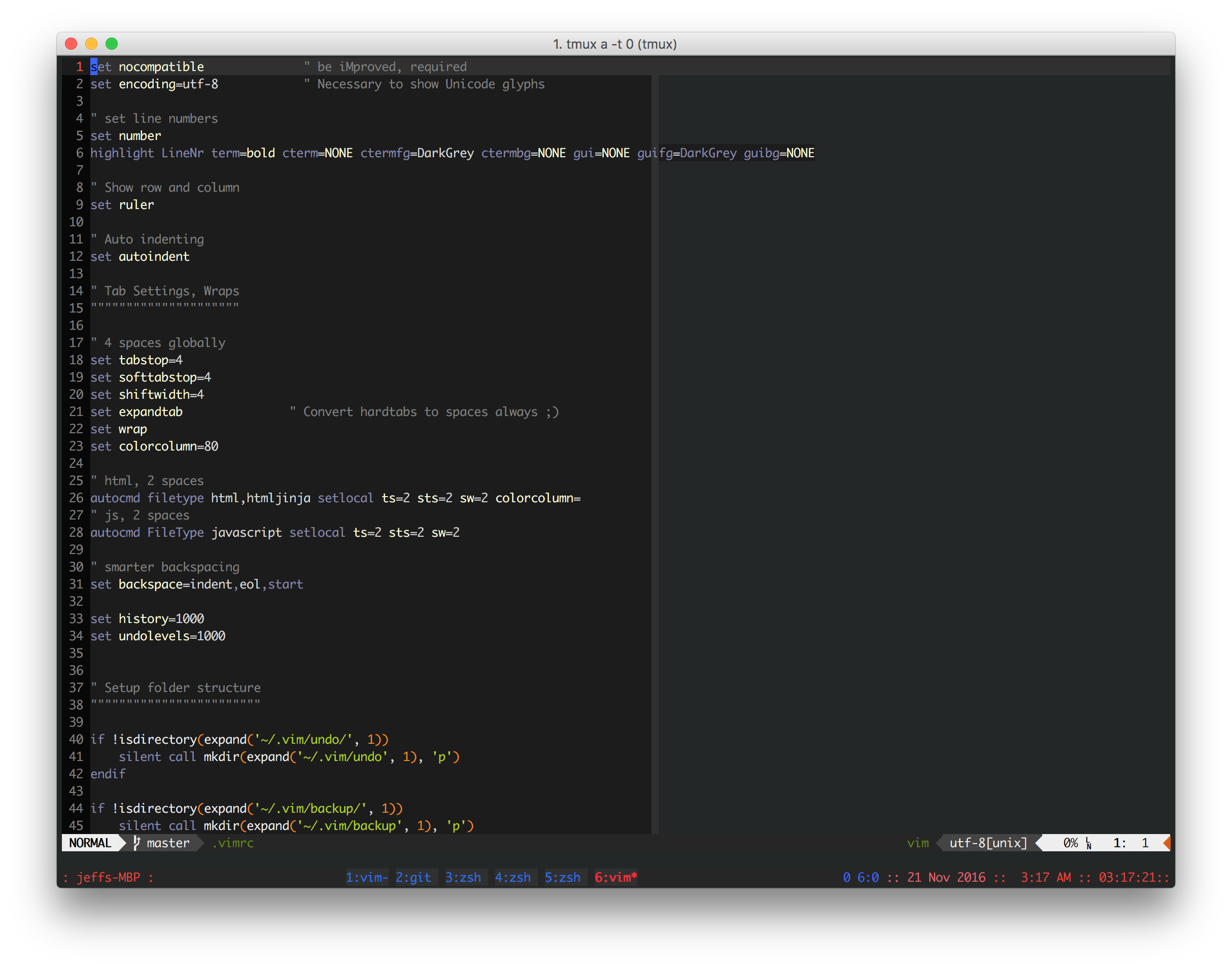 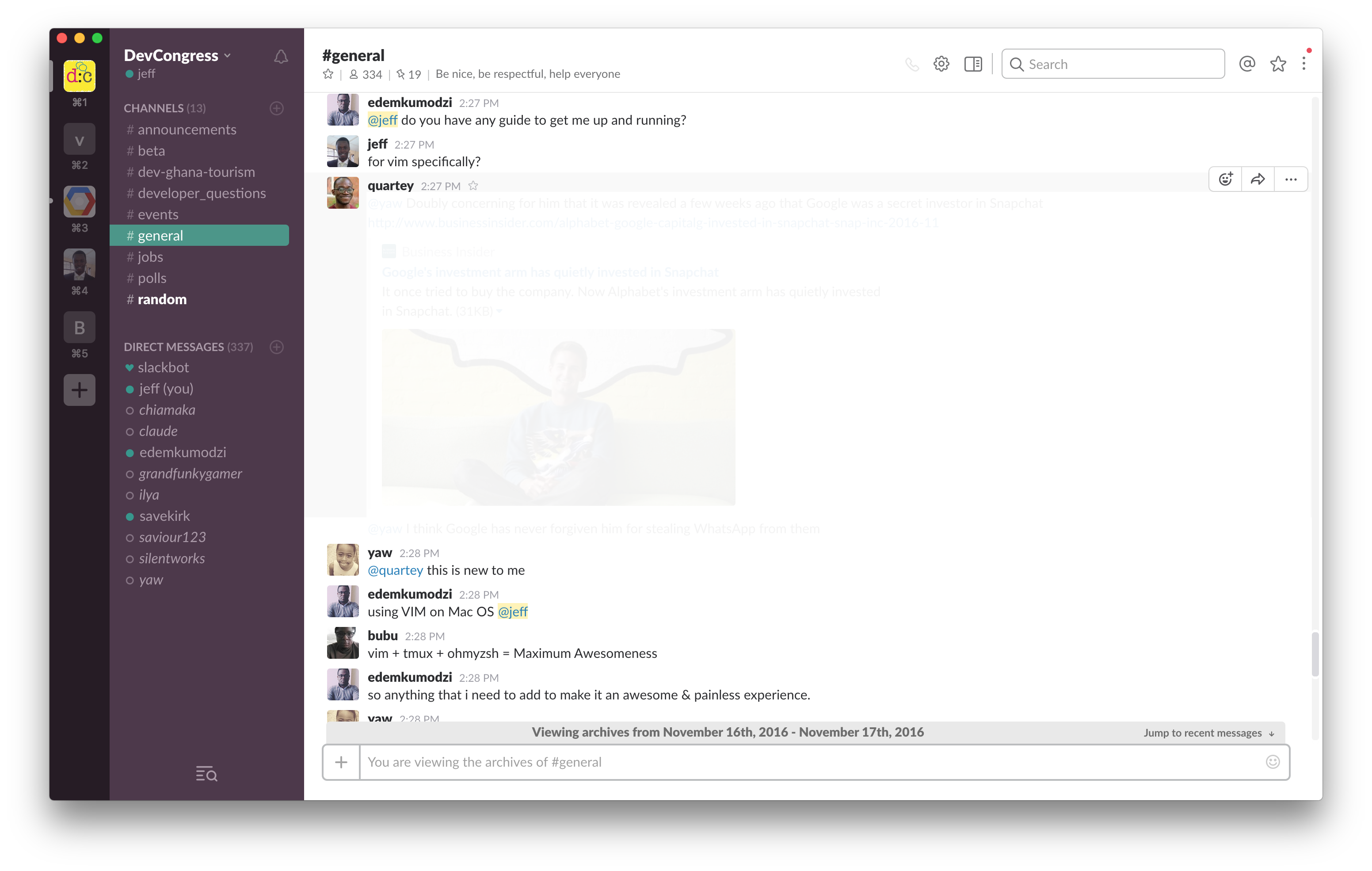 So let's get started

Chances are you already have Vim on your system if you're on a Unix or Unix-like system.

On a Mac, you can get the most recent version of Vim with Homebrew, the one and only package manager :p.

People in the Vi(m) community do not really agree on how many modes there are, but hey let me add to the /debate.

The main things you'll find yourself doing include:

With that out of the way, there's the:

This is the default mode you'll find yourself in, each time you're in Vim. In this mode you can navigate your way through text with hj kl. These conveniently happen to be home row keys as well.

` It's in this mode that you can perform a number of verbs and modifiers on nouns(to borrow heavily from Yan Pritzker's Vim lingo).

This mode allows you to enter text. While you can use commands in a special mode–insert normal mode(C-o i.e ctrlo), Vim's insert mode is specialized for one task–entering text.

Enter insert mode with i

You can use one of the following to get back to normal mode:

In this mode we can define a selection of text and then perform some operations on the text. This mode is accessible with the v key, when coming from the normal mode. There are 3 visual modes though depending on what you're trying to achieve.

Hitting esc will almost always get you back into normal mode.

And finally if you haven't found how to exit Vim yet, you're not alone.

I've been using Vim for about 2 years now, mostly because I can't figure out how to exit it.

If you're trying out Vim for the first time though, I can't recommend vimtutor enough. It's by far the quickest way to get familiar with basic key movements, verbs, etc. etc...

It comes as part of the vim installation process. Just invoke it at the terminal:

I always remap my ⇪ into an extra esc key. I don't use the caps lock key anyway.

On a Linux system, I do this with xmodmap. On a Mac, I achieve something similar with a combination of Karabiner, formerly known as KeyRemap4MacBook, & Seil.

In this section I'll attempt at explaining some of the general settings I've set up in my vimrc–Vim's config file.

Within vim, I also remap ; to : in normal mode.

It helps to just get rid of the mouse. While at it, get rid of the arrow keys as well. You'll become a pro in moving with the "right" keys in no time at all.

Adding this to your .vimrc disables the arrow keys in insert and normal mode

Although I don't agree with the mouse part, it can come in handy:

Some sane defaults for searching:

With both ignorecase and smartcase set, if a pattern contains an uppercase letter, the returned search becomes case sensitive, otherwise it isn't. Comes in pretty handy.

I make use of the <leader> key as a prefix key for a number of custom key mappings so as not to mess too much with Vim's defaults. By default this is mapped to \.

It's a good idea to use the <leader>, as it's a way of extending the power of vim shortcuts, in fact many plugins create their own mappings that start with the leader. But \ is awkward to reach so I remap it.

That way if you have a map of <leader>jd, you can perform that action with ,jd

There are countless Vim plugins lying all over the web. And coming from other editors, you might start to feel left out. But hey don't fret it. There's always a plugin for it :)

I use Vundle to manage my plugins. It's feature packed but then allows you to never think about the process of managing plugins ever once it's set up. Just plug 'em in, even personal plugins.

Once you've added a plugin to your config, you can install it in vim with:

My Vim configuration is heavily geared towards Python Development, but there's some love thrown in there for JavaScript, CSS, HTML, TypeScript(read: Angular2) and Markdown. Oh and Java when I'm feeling tipsy at times :D

For appearances, I manage my colours myself, but you can easily use one of the many colour scheme plugins available. If the terminal is capable of displaying 'colours', all 256 of them, then I load my custom colour scheme:

And to install a plugin is super simple. Lots of examples here

I've left a couple of the plugins I use out of this post. You'll find them in my vim configuration. But a more exhaustive list of plugins to install can be found @ vim awesome, linked below in Resources.

It's my hope that at this point, I've helped demystify Vim and that your experience getting started in Vim is a lot more awesome and painless.